END_OF_DOCUMENT_TOKEN_TO_BE_REPLACED

Todd Howard Ezrin, NCIDQ, LEED AP, is the Principal and Founder of TOBE DesignGroup, an award winning interior design firm located in Bethesda, Maryland. As a proud fourth generation Washingtonian, Todd is a staple of the D.C. area design society and his firm is highly sought after for both its residential and commercial design services. Todd is also a pillar of his D.C. community, known for his philanthropic work with Transformations of Montgomery County of which he serves as President of its Board of Directors; and, most notably, his annual “Toys for Todd” birthday fundraiser benefiting the Marine Corps Toys for Tots Foundation, which he elects to host at local design showrooms.

While his interiors reveal an intrinsic artistic gift, Todd is nothing if not responsible, measured, and pragmatic. In addition to being a licensed designer holding the NCIDQ designation, he is also LEED AP certified and makes both function and sustainability as much a priority in his work as the high style for which he is known. Being an exemplary role model for interior designers, business owners, and community leaders alike, we felt he was the perfect subject for our latest installment in Design Manager’s Creative Conversation series. 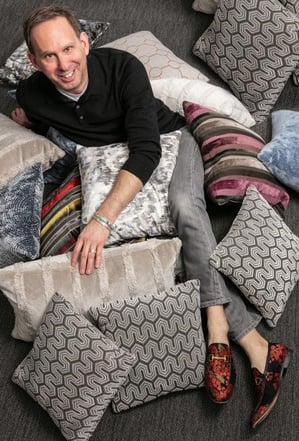 With all of his success in the field, one might be surprised to learn that interior design is a second career for Todd. Growing up, he dreamt of becoming an architect but felt daunted by the prospect. He humbly explains,

I am terrible at math and I was terrified of going to architecture school because of all the math involved. Beyond that, I had no idea what I wanted to do. I ultimately decided to pursue a business management degree, not really thinking it all the way through that there's a lot of math in business as well!

After graduating from Ithaca College with a degree in business, Todd got a job working in hotel management in Bethesda, a career he dutifully pursued for a few years. All the while, an inner calling grew louder and louder, signalling he was destined for a different path. Eventually, Todd decided it was time to follow his dream and earn a degree in interior design at the venerable Marymount University.

Once immersed in his work, Todd easily thrived in the D.C. area design community. He also had the drive and diligence to pass the NCIDQ and LEED exams to become licensed and certified. After working for two of the leading architecture firms in the mid-Atlantic, he founded TOBE DesignGroup in 2011.

Starting A Business and Making It Successful

Embracing math and earning a business degree ultimately served Todd well, as his discipline, pragmatism, and serious sense of responsibility have made TOBE DesignGroup an undeniable success. TOBE DesignGroup works on both residential and commercial interior architecture, design, and branding projects, covering the full spectrum of what can be defined as interior design. Todd explains,

Interior design is a very misunderstood field. A lot of people think that we just go in and do the decorating part and make everything look pretty, not realizing that we can get involved in many aspects of the design, including space planning and life-safety issues. In reality, we are more like interior architects.

Of course, being a master of design is only half of what it takes to make his company successful. Todd also stays focused on business operations, never dropping the ball during the complicated process of executing projects and keeping records up to date. He uses Design Manager to keep the business operations at TOBE DesignGroup organized. As competing products have come into the field over the years, Todd has done his due diligence and finds that Design Manager has the most comprehensive support for interior design businesses, saying:

"The competing product that we tried lacked a lot of the simple, basic elements that Design Manager has. I like the fact that Design Manager is all encompassing for us. I especially like that on the procurement side, we're able to easily write specifications, turn those into a proposal to send to a client, and then turn it into purchase orders. After that, it’s easy for me to invoice the client for the balance due. Design Manager makes it pretty seamless."

Todd is brimming with wisdom he is happy to share with his fellow interior designers and business owners. In addition to keeping business operations organized, it’s important to keep your communications with clients running smoothly. Todd prefers to speak with clients in person or over the phone instead of over email or text, but he encourages designers to find the method that is easiest for them and stick to that. He also urges designers to value their manufacturers and vendors and treat them with respect, not only because it’s the polite thing to do, but because they are partners with whom designers rely on to execute their vision to perfection.

Lastly, Todd emphasizes the importance of loving what you do professionally. When describing his favorite thing about being an interior designer, he had a hard time narrowing it down:

"No two days are ever alike and I like the variation over the mundane. You meet with a lot of different people for a lot of different reasons, but ultimately we get to make a huge impact on the built environment. And, in the end, the client’s enthusiastic response for the finished product makes it all worth it."

To that end, Todd finds balance by leaving work in the office so he can enjoy time at home with his husband, Mark, and their two cats, Catniss and Renly.  Todd and Mark are also looking forward to eventually spending time with family and friends at a weekend home they are building in Berkeley Springs, West Virginia.

It’s not easy to balance artistic passion with a business-oriented mindset, but it works for Valerie Stei...
END_OF_DOCUMENT_TOKEN_TO_BE_REPLACED

Tuning into your inner self is not easy in our world of constant connectivity, but for Lisa Kahn, work be...
END_OF_DOCUMENT_TOKEN_TO_BE_REPLACED

Wendy Berry knows that great people are what make W Design the award-winning interior design firm it is t...
END_OF_DOCUMENT_TOKEN_TO_BE_REPLACED